Order by 2pm for next-day delivery.

Give us a call. We'll see what we can do.

The Canon 100-400mm Mk II has been probably the most eagerly awaited new lens in recent history. The Mk I version is hugely popular, but it was introduced back in 1998 and rumours of a new version have been circulating since at least 2006, possibly earlier!

So anyway, was it worth the wait? What is the Mk II like?

Well, the most obvious difference is that this has a conventional twist-zoom mechanism, unlike the push-pull of the Mk I. The push-pull is something of a 'Marmite' feature, but there's no doubt it helps in framing and shooting rapidly. This lens won't have quite the same ergonomics in that respect. On the other hand the new tripod foot can be detached without removing the lens from the camera, and there's a little window in the lens hood so you can use a polarising or variable-ND filter with the hood on. Some nice touches there.

Ergonomics aside, there are a whole host of improvements. 16 years' worth of technological development means that this lens is noticeably sharper than the Mk I; it has better image stabilisation; and it has an astonishing minimum focus distance of 0.98m, which gives a maximum magnification of 0.31x.

All in all it's a superb package. As of late 2014, this lens coupled with a Canon 7D Mk II is probably the best hand-holdable setup available for wildlife, motorsport and aviation.

This lens can be used with a Canon Extender (teleconverter). The 1.4x Extender makes it a 140-560mm f/6.3-8 zoom, which will still autofocus across the entire zoom range on EOS 1D-series, 5D Mk III or 7D Mk II cameras. It is also physically compatible with the 2x Extender, which makes it a 200-800mm f/9-11 zoom, but that combination is manual focus only. 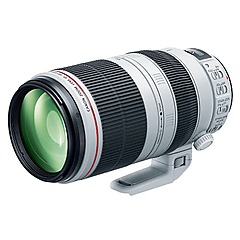 Top
View Availability
PROTIP: You can check the availability of several lenses at the same by adding them to your basket and viewing the Basket Availability.